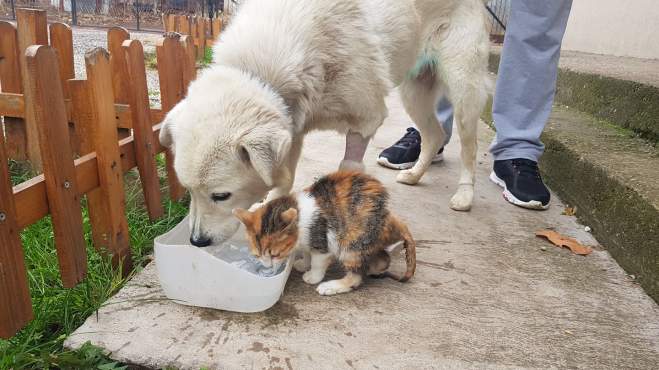 This is the fourth full year Angel’s Choice has been supporting rescuers of cats and dogs, mainly in North-Macedonia. It is also the first year that cats and dogs were not actively promoted and mediated for adoption due to personal health problems of the founder and only member of staff of Angel’s Choice and new developments in legislation.
Even without the activities dealing with adoption and transport it has been a very busy year. In total hundreds of dogs and cats depend on donations (money and necessities) collected by Angel’s Choice and sent to the rescuers. Because their shelters and sanctuaries have limited capacity the animals they rescue are always animals in need: ill, weak and injured dogs and cats from the streets. Kittens and puppies trying to survive without mother, dogs and cats that were poisoned, attacked, hit by a car or otherwise injured. Dogs with medical problems due to leishmania or diseases caused by other parasites and ticks.
As always there were moments of big despair and grief, and also moments of relief and utter joy.
Five animals that were adopted in Belgium or the Netherlands died this year: dog Mimi and cats Civki, Dushi, Charlie and Jasmin. Thanks to their rescuers and adopters they knew love and got the best possible care in the last part of their lives.

Neuterings
Neutering is the best way to save lives. Therefore Angel’s Choice started a new neutering project with Angelcats Sanctuary. In 2019 the amazing number of 97 cats were neutered: new arrivals at Angelcats Sanctuary, stray cats (trapped, neutered and returned to their area), cats looked after by other rescuers in Skopje and Kochani.
17 Dogs and 1 cat from Friend of Animals were neutered. The neutering started after the summer and we hope to neuter plenty more dogs and cats in 2020.

Finances
One of the main tasks is raising money for food, medical treatment, supplements, neuterings and vaccinations. Angelcats Sanctuary, Friend of Animals and Dog Rescue Gastarovska have a number of loyal supporters who donate a fixed amount each month. These threeorganisations also have animals that have a sponsor of their own; these sponsors donate a fixed amount every month for their ‘own’ animal. In the case of Dog Rescue Gastarovska this only applies to handicapped dog Dora.
Angel’s Choice itself also has a few loyal supporters.
The loyal supporters and sponsors provide a steady income but not enough by far. Regularly appeals had to be made to raise enough money to pay for food.
Angel’s Choice organised 12 auctions in 2019 and the proceeds are used to pay vet bills, medication, supplements and special food. Items for the auctions are donated by people and 100% of the proceeds goes to the rescue organisations. Postage for sold items is sponsored structurally by publishing company A3 boeken.
Another way to raise money is collecting coupons and sponsorclicks when people buy items on the internet and Angel’s Choice gets a commission.

Donated necessities
Once again Angel’s Choice received many necessities from people, vet clinics and organisations in the Netherlands and Belgium. E.g. deworming tablets, spot on anti flea treatments, all kinds of medication, diapers, puppy training pads, blankets, towels, dog coats, collars, leashes, harnesses, vitamins and other supplements, snacks, toys, cages, baskets, carrier bags, bandages, gauzes, medical cones, food bowls and more. In total 17 parcels of 20 kilo each were sent to the various rescuers and rescue organisations in North-Macedonia by mail (shipping sponsored by publishing company A3 boeken). Items that could not be sent to North-Macedonia because of size, weight or contents were distributed amongst various private sanctuaries in Belgium and the Netherlands.

Thank you
Angel’s Choice (run by Adrie Beyen with moral support from Angel, adopted from a Dutch public shelter, and Belco, adopted from North-Macedonia) wants to thank all the people who have contributed one way or another: rescuers, sponsors, loyal supporters, people who donated necessities, people who donated items for the auction, people who collected coupons and Mieke who turned them into money, people who shared their thoughts and idea’s, vets who offered their opinion and advice, people who bought at the auctions, Monique and Hans who are part of the admin team of the auctions, adopters, fosters and everybody I forgot to mention.
Humans are the biggest threat to animals, but fortunately there are also humans who look after animals every day of their lives.